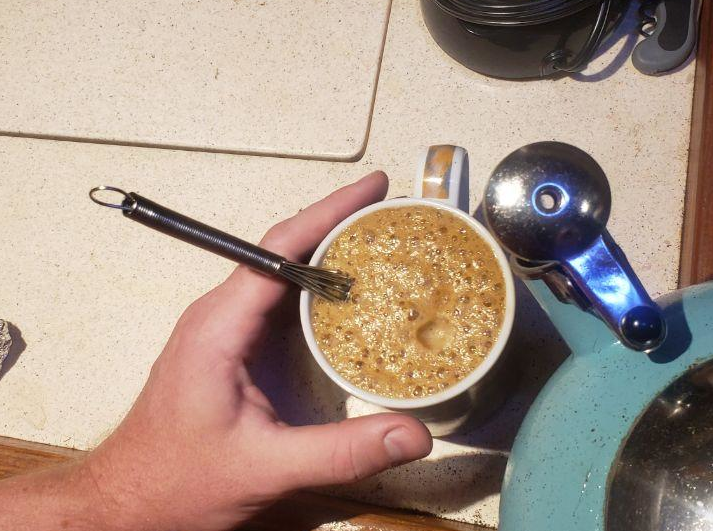 Like many people, I need my morning cup of Joe… *ba dum tzz* (disclaimer: Joe did not write that!)

But I do start almost every morning with a cup (or two or three) of coffee.  Now, I’ve been called a coffee snob, but I like to think of myself as more of a coffee nerd, bordering on being a geek some days.  And, given that sense of nerdy dedication to my morning fix, I was intrigued by the idea of a new-ish fad; butter coffee, or if you go in for the brand names, Bulletproof Coffee. 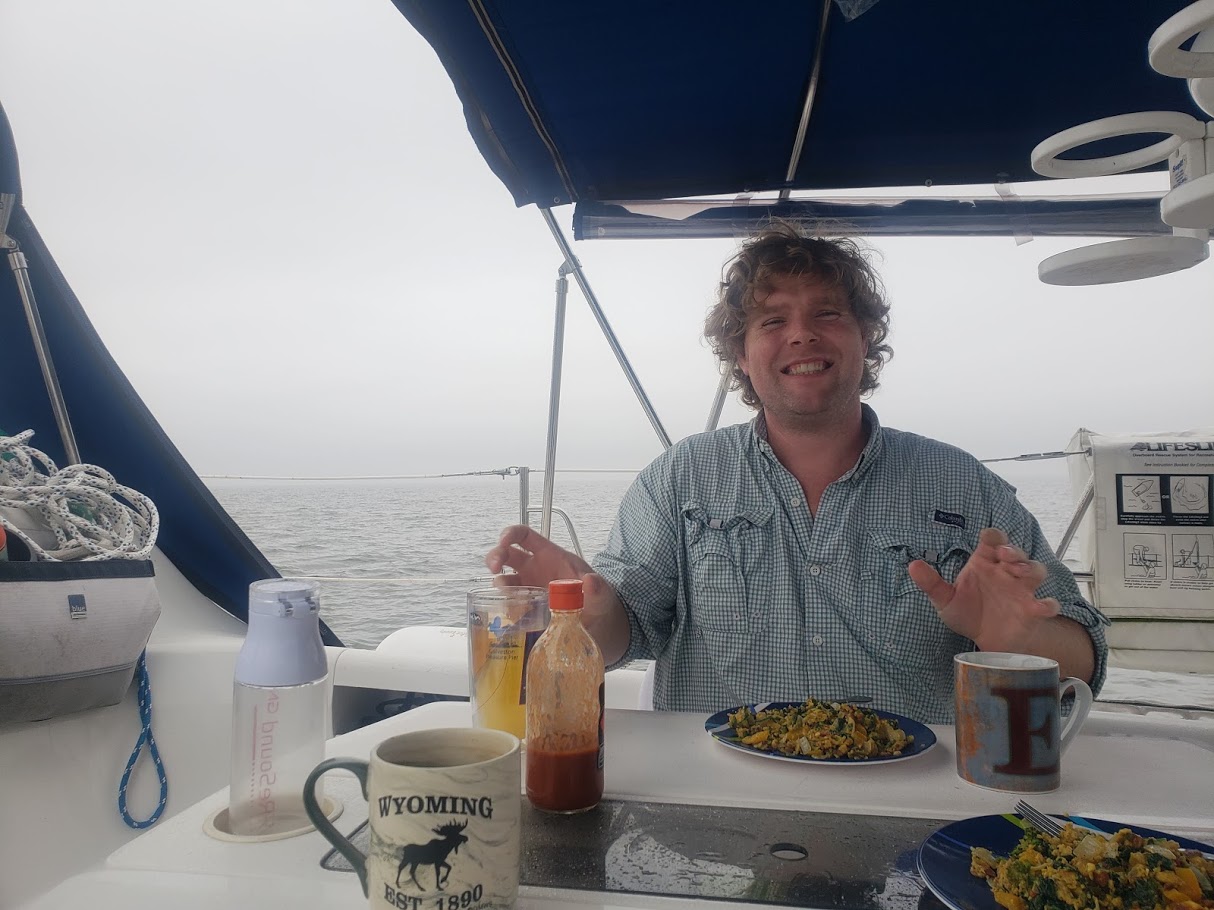 “Think it over: every time you taste something that’s delicious beyond imagining and you say, “What is in this?”, the answer is always going to be: Butter.”

A Brief History of Butter Tea

It’s all based on a simple, well-known, often controversial health philosophy: the human body should be fueled primarily by fats, then proteins, then carbohydrates/sugars as a “last resort”.  It’s been called many things, like Atkins, Keto, South Beach, and each has their own unique spin on the ideal macro-nutritional balance that is best for the body: best for weight loss, best for cardiovascular function, best for brain stimulation.  Each makes their own claims, and I’m not smart enough to offer any kind of real evaluation of how true or false any of them might be.

It all started, according to the New York Times, when Asprey visited Tibet and tried their yak butter tea.  In 2009, he posted the recipe for “Bulletproof Coffee” and has since inspired a devoted following as well as intense vitriol from his detractors.

Hype and politics aside, I, Joe the coffee nerd (or addict, if you prefer) decided to give it a try.

Everything You Need to Make a Better Butter Coffee 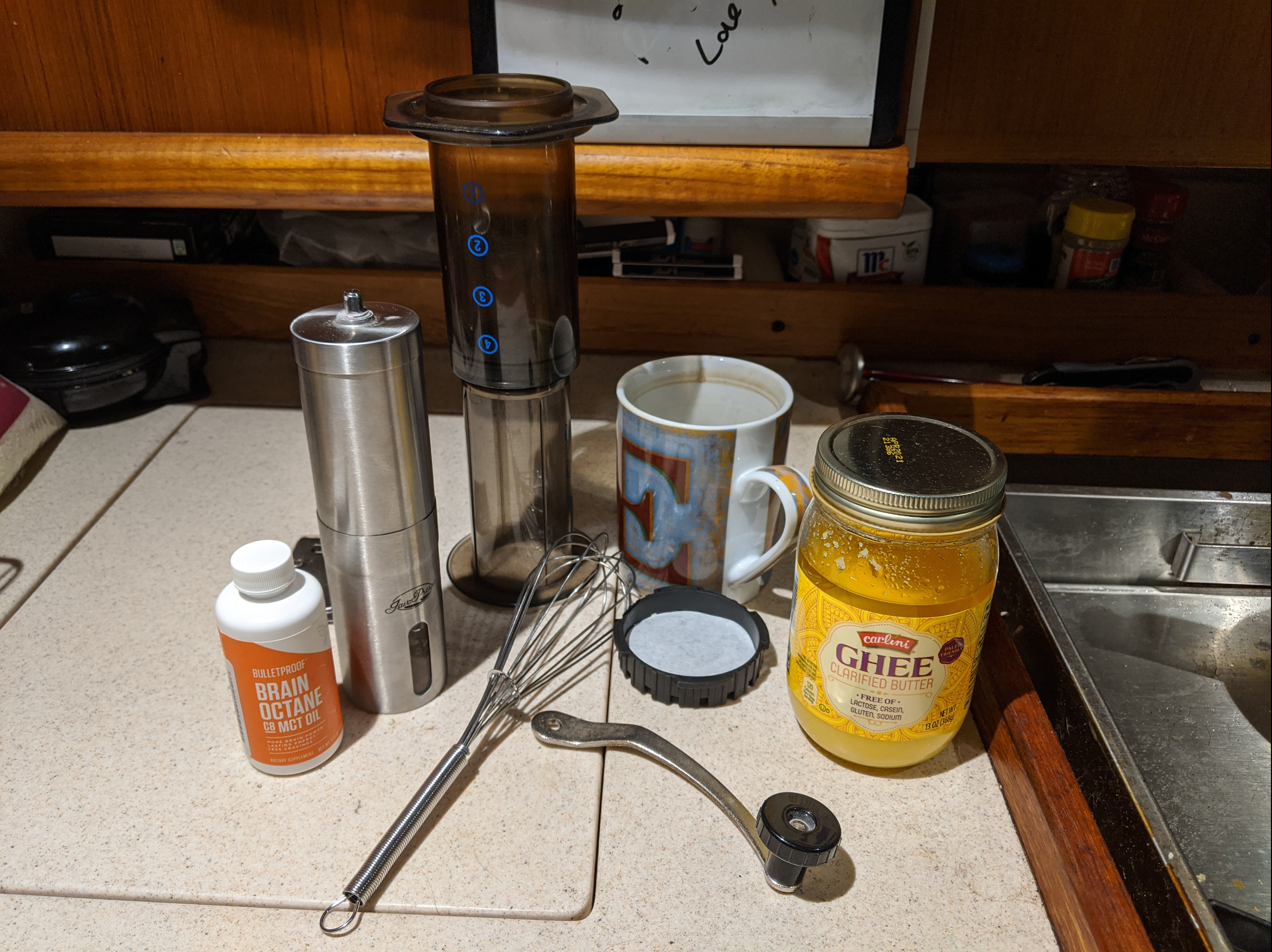 There are all kinds of claims about which specific butter you should use, if ghee is superior, brand preference for the MCT oil, and, per Asprey himself, how best to avoid the dreaded mycotoxins that plague an alleged 70% of coffee beans available today.  Given the overwhelming amount of discussion, dissent, and outright hateful internet fighting, I decided to fall back on my most tried and true method of decision making: I got the most convenient things I could that seemed to fit the general parameters.

Turns out, mycotoxins are a real thing and were a valid concern, but reputable producers of coffee have, for decades, been processing their beans in such a way as to remove any significant traces of them.  So, I checked the cabinet, found that we still had plenty of our Banned Coffee, checked coffee off the list.

Next, the butter.  One thing that most people seem to agree on is that your butter should be from grass-fed cows.  I’ll probably discuss the reasoning behind this in another post, but having done my own research into which fats are good fats and why, I wholeheartedly agree with that premise.  Since I’d never used ghee, or clarified butter, before, but I knew it was on the shelf at our local Aldi, I checked the jar, found the “grass-fed” bit, marked butter off the list.

Finally, the MCT oil.  There’s plenty of discussion out there, and I encourage you to read up on it instead of taking my advice.  But, as laziness and practicality prevailed, I just skipped the actual decision-making part of the process and purchased a small bottle of the Brain Octane MCT Oil from Bulletproof via Amazon.  Mostly, my justification was that it came in a small bottle so it would be easier to store and less of an investment if I hated butter coffee.  So I clicked the little yellow button and two days later, the last of the ingredients arrived at the UPS store.

Now, the making of the coffee.  Not wanting to introduce any new methodology to the test, I decided to stick with the tried and true Aeropress method of making my coffee.  I will definitely do a post with more details about this way to brew what I believe is the best cup of coffee you can get at home, but for today, just pretend I made my coffee the same way you do; the point is what we’re about to do to our favorite breakfast drug, not how we prefer to get our fix in general.

If you’ve done any amount of cooking and have the most basic amount of human intelligence, you know that pouring coffee on top of a few tablespoons of oil and stirring with a spoon is not going to give you a good mixture.  If you have a chemistry background, you’re probably thinking, “yea, it gives you a suspension,” and you’d be right, but what it really gives you is a temporary suspention where the oils very quickly just float up to the top and you have to distinct layers of fluid.  I do plenty of cooking and consider myself intelligent enough to get by, so naturally, I poured my coffee over my oil, stirred with a spoon, and was pretty disappointed with my first cup.

For my second attempt, I used a high-speed emulsification blender.  This resulted in the typicial Instagram picture of a frothy brownish liquid that promises to change your life.  It also resulted in a LOT of extra dishes, just to get through the morning.  Since butter coffee is supposed to be a breakfast replacement, I’m willing to call the extra dishes a push, as I didn’t have to make eggs or bacon (well, if Bree and I were both drinking it, I wouldn’t; if either of us wanted a traditional breakfast instead, it’s extra dishes).

For the third attempt, I didn’t add any water to my coffee, a feature of the Aeropress method, and instead used a whisk to get the suspension I was looking for.  Then I gently added hot water to get the amount of coffee I usually drink.  I can say that this method doesn’t hold its suspension quite as well as the blender, but it was much easier, made fewer dishes, and it held well enough that I didn’t feel like I was drinking through butter to get to my coffee.

Or, if You Prefer, the Recipe

Brew about a cup of your favorite brewed coffee

1 tablespoon of MCT or coconut oil

1-2 tablespoons of unsalted butter, or ghee

Blend ferociously in a blender until it resembles a latte 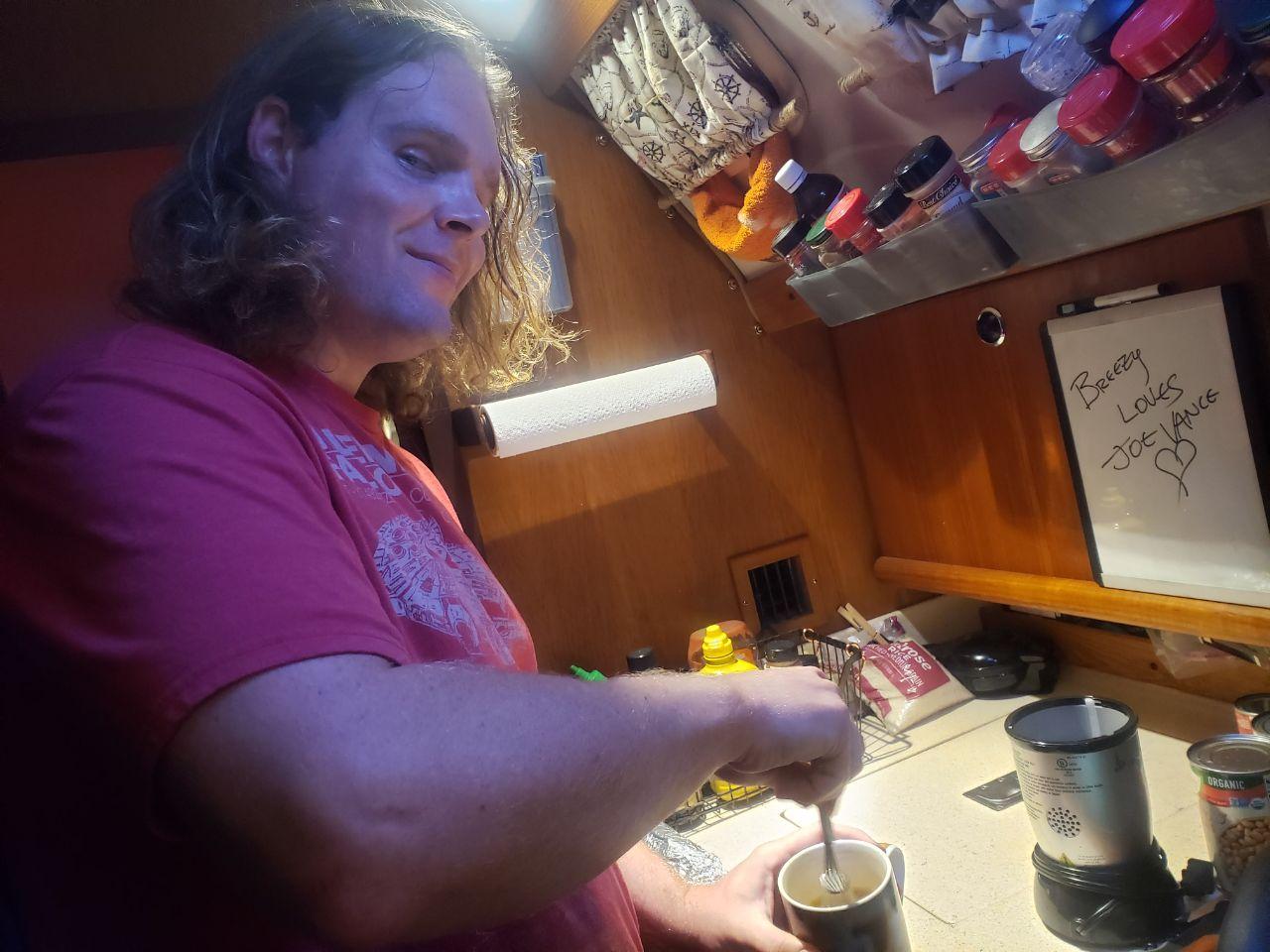 I was pleasantly surprised by the final flavor of the butter coffee.  It was very similar to a latte with a bit richer flavor, but the butter and oil didn’t overpower the coffee flavor too badly.  When I brewed a slightly stronger cup of coffee than usual, it was just right.  The texture took a bit of getting used to; it was somewhere between a latte and a stew.  It wasn’t so thick as to be offputting, but it was noticibly thicker than any other method of coffee I’ve tried before.

As far as the brain-boosting effects, it might have made me feel a bit more alert and ready for the day ahead, but it wasn’t so noticeable a change that I’m willing to blame it on the coffee over just a placebo effect.  Also, the few days I tried it, I felt hungrier earlier in the morning than usual, which I thought was strange.

So, I’m not here to tell you how to live your life, but if you don’t start drin…. No, seriously, I do subscribe to the benefits of a high-fat, low-sugar/processed carbohydrate diet, so my recommendation is skewed by that.  The short answer is, I’m not planning to make this part of my daily routine, but I expect there will be days where this is what I’m in the mood for in the mornings.  There may even come a time where I do a 2 or 4 week trial where I get strict about it and only do butter coffee in the mornings.  But for now, my recommendation is that if you like a rich creamy breakfast beverage every now and then, give butter coffee a try and decide for yourself.  If that’s not your cup of coffee (okay, I’ll take credit for that one), I don’t think you’re missing out on one of life’s great secrets by skipping this one. 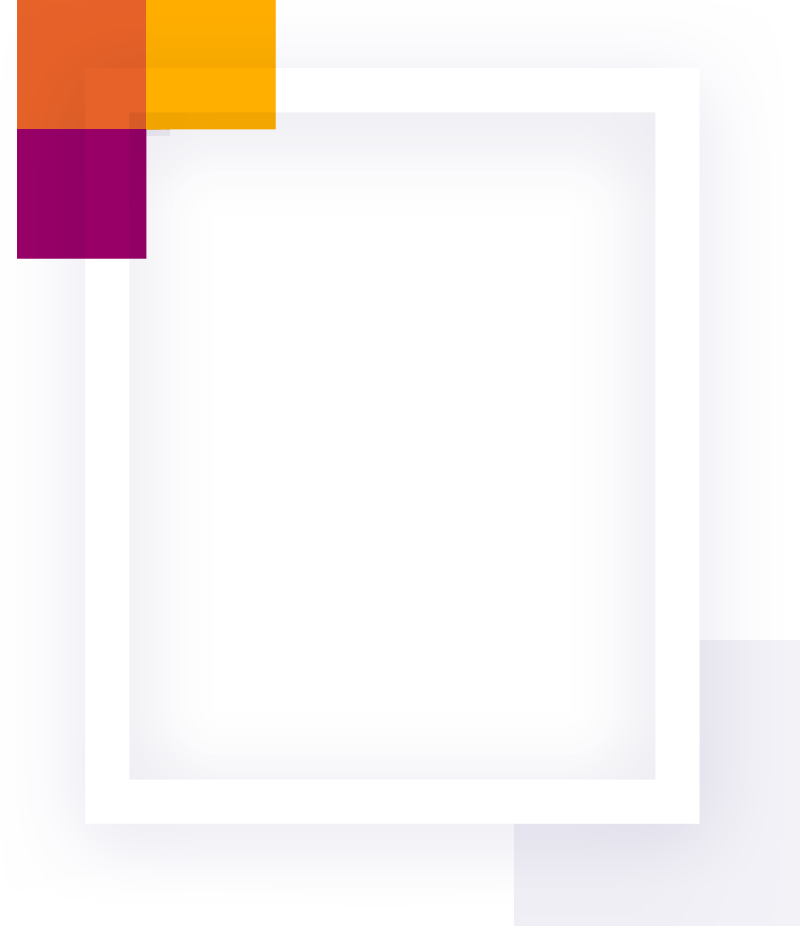